I have what you might call an idealized relationship with ginger beer. When I was younger, I used to read a lot of Enid Blyton books. To paraphrase a Mitch Hedberg joke, I still do, but I used to, too. One of the constants in her work is that her characters drink enough orangeade and ginger beer to float a small armada.

Never having tried either drink, I tried, at about the age of 17, to brew ginger beer. Don’t think that I was headed into this blind- I was regaled with stories about how my father had made root beer as a younger man until the caps on his bottles blew and sprayed root beer all over the ceiling, following which my mother forbade him from continuing the practice.

Being forewarned in this way, naturally, I put my bottles in a tote bin and weighed the lid down with a calculus textbook. That didn’t stop one of the bottles from exploding, nor did it stop the resulting drink from tasting not entirely unlike musty grapefruit vodka- unknowing and unpracticed in the mechanics of brewery, I used a champagne yeast and did nothing to stop the fermentation process, until the sugars had been devoured sufficiently to choke the yeasts in alcohol- and this being a champagne yeast, that was around 17% alcohol by volume.

I didn’t much like the results, but by then I’d had an oppotunity to try imported, carbonated, non-alcoholic Jamaican ginger beer and I was hooked.

A few years later, with much fantasy literature as my inspiration this time, I gave mead a shot, this time choosing to make sack (that is, mead that was so thoroughly honeyed that the result is thick, glutinous and sweet even after the yeast had died of alcohol poisoning). I made six bottles of lemon melomel (fruited mead) and six bottles of chocolate metheglyn (spiced mead). I still have a couple bottles of each, ten years later.

The results this time were, at least, more drinkable, though it took the idea of a dessert wine to an extreme.

Finally, a few days ago, I started making a wild-yeast ginger bug. This time, at least, I am following instructions. And, instead of using white sugar, I’m using some local honey from the farmer’s market. After some discussion with my friend Anna, I came to the conclusion that a ginger beer, if spiced and made with honey instead of white sugar, is both a ginger beer and a mead. 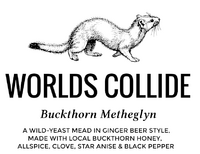 I decided to pick up some flip-top bottles because crown-capping stubbies is, let’s be honest, a real pain. They’re on the delivery route for arrival tomorrow, and my honey-sweetened ginger bug will (should) be ready for pitching on Monday night. Per the recipe I’m following, it should be ready for drinking either Wednesday night or Thursday night. Because I have just a little edge of the fanciful to me, I’ve come up with a label to put on the bottles: “Worlds Collide” is the name of the drink, because it’s going to be a ginger beer metheglyn (spiced mead, remember) combination.

It has exactly what you’d expect on the label- the name of the drink, the… I dunno, subtitle? of “Buckthorn Metheglyn”, and an appropriately poetic long-form description: “A wild-yeast mead in ginger beer style, made with local buckthorn honey, allspice, clove, star anise & black pepper”. I need to go to the local bulk food store tomorrow and source up some allspice berries and also some star anise (I’ve run low/out of those two in whole spice form). I’m also considering adding some cardamom pods- I’d have to change the label, but I’m almost thinking it’d be worth it.

What you see here is just a part of the label- I put a full ingredients list, and left room for writing in a bottling date, an aging time (in hours because that’s how you measure carbonation times for soft drinks), and an approximate alcohol percentage (which will cause me to pull out my hydrometer for the first time in almost two decades- I knew I should keep it instead of throwing it away! Ha!). I might even be fancy and use the fountain pen’s italic nib to fill in the labels. That seems like it could be fun. I also need to do some research on making a good paste for gluing it to the bottles, because I’d ideally like to use something that will come off easily for cleaning up after I’m done with this particular drink. I’m pretty sure I’ve seen, somewhere, that I can use a flour-and-water combo as label glue.

Unless otherwise specified, the contents of this page are ©2020-2023 Sean M. Ainsworth. All rights, including reproduction or modification, are reserved.