I still can’t shake the feelings from this one.

Halvard of the Circle 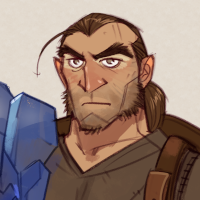 This is Halvard, variously known as “Warden”, “Storm Warden”, “Flint” or “War-leader” - art by the brilliant Aviv Or, and used under commission.

I’d love to tell you Halvard’s story, but it would take too long- he was my character for an eight-year-long campaign, which I actively played for six of those years. I was invested enough into this character to continue his plot arc even once I was no longer playing. I kept the DM of the campaign in the loop on what was happening, including a slightly insane gambit to fight the hereditary enemy of his people, using the Primal Prison ritual to seal their otherwise-immortal Queen into a tree. In order to use that ritual, you have to take some personal possession away from the prisoner.

Halvard got the rest of the adventuring party to seal his memories of a life spent hating the Queen away, so he could make peace with her and give her a gift, working under the theory that the memory seal could be broken and he could then lock her away in the Primal Prison by stealing back the gift. I thought it’d be interesting to write the story for the rest of the players to read over.

The DM had other ideas.

After two and a half years away, I rejoined the team in early 2020, surprising all the other players highly. Halvard explained that he had made peace with the Queen- because as far as he could remember, that’s exactly what had happened- and he guided the team to the Queen (as she had now morphed to be the final boss of the campaign).

When the seal broke, he stole the gift back, as anticipated, and led the effort to seal the Queen into a tree the local pantheon had guaranteed would last for eternity.

So now there was only one catch.

The Primal Prison ritual in 4th Edition D&D says that the prison will break if the jailer ever dies.

And that’s where the Warden Epic Destiny “Perfect Guardian” comes in. In high-level 4th edition D&D, you pick an Epic Destiny that tells you what happens to your character. In my, Halvard’s, case, this was as follows.

When you seize your destiny, your instincts guide you to the fate you have earned. You travel the world until you come upon an ancicnt stone circle. The menhirs come to life, welcoming you as a brother or a sister and inviting you to stand vigil with them over the world. You take your place alongside these mighty wardens. You feel your skin hardening and your heartbeat slowing as you assume the final transformation.

Halvard hardened himself into a block of stone using his Epic Destiny and the Primal Prison ritual, standing guard over the Queen for eternity, undying.

Now I’ve got Halvard stuck in my brain and I’m trying to play Ilex and it’s driving me absolutely bonkers. So that’s cool.

Unless otherwise specified, the contents of this page are ©2020-2022 Sean M. Ainsworth. All rights, including reproduction or modification, are reserved.